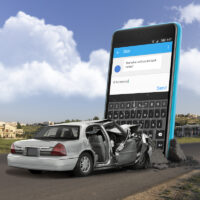 As a personal injury attorney dealing in auto accident cases for more than forty years, I can share with you the fact that, while in highway accidents, catastrophic and permanent loss may result from equipment error, all too often the real cause is distracted driving.  According to EndDD, driver distractions fall into three main categories:

V.K. was driving his semi truck westbound on a U.S. highway in Indiana when he was struck by another semi-truck owned by the R. Company. The owner/employee of that company had lost control of his vehicle, first leaving the roadway onto the ditch, then over-correcting, sideswiping V.K.’s truck and causing severe injury to both V.K. and his vehicle.

In the course of the investigation, the driver who had caused the accident, C.R., revealed that he had thought he smelled something burning in his cab.  Distracted by that smell, he admitted to having taken his eyes off the road, losing control of the truck.

Unfortunately, C.R.’s failure to maintain proper and safe lane management, keeping a safe lookout on the road, resulted in injuries to the V.K, including personal injury, property damage, loss of income, and acute pain and suffering.

Although the plaintiff had asked for a jury trial, the case was ultimately settled out of court…

Let’s talk about this… any case or claim that involves an injury to the body or mind falls under the umbrella of personal injury law, with the underlying principle being that you generally have the legal right to recover compensation when you are injured as a result of someone else’s careless action.

Recovery of compensation generally happens either through a formal court-based lawsuit or settling the claim outside of court. One of the most important decisions any accident victim will make is whether to accept an insurance settlement offer or to consult a personal injury lawyer.

Approximately 1,000,000 traffic citations are issued in Indiana every year, the Indiana Judicial Branch website says. Ironically, neither the plaintiff nor the defendant in this “Tale of Two Trucks” was from our state.  The victim was a citizen of Pensacola, Florida; the distracted driver resided in Illinois.  The trucking company had its principal place of business in Wisconsin.