ALLEGATIONS OF SEXUAL ABUSE AT CENTER FOR HUMAN TRAFFICKING SURVIVORS 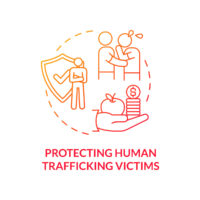 A sexual abuse investigation is currently underway at a residential facility for human trafficking survivors, according to a recent article in the Indianapolis Star. The probe was initiated after two women clients filed police reports claiming they had been assaulted by medical staff during their stay at the nonprofit center.

The women accusers, already victims of human trafficking, had already suffered abuse and were in the residential center to try and rebuild their lives. Since the investigation has not been concluded, it has not been proven whether staff members were the perpetrators in any sexual assault incidents. Nevertheless, the institution has a legal obligation to protect its residents and to provide an environment safe from predators.

At the Ramey & Hailey law firm, where we do our part every day to help victims of sexual assault and abuse, we know how very, very hard it is for any victim to relive the experience by talking about it with law enforcement and even with us. And when sexual molestation comes about not at the hands of a stranger, but through someone in a position of trust – that makes it even harder. Again remembering that the allegations, in this case, have yet to be proven, it is tragic that the Hope Center was founded to be “a safe place to heal and a clear path to community reintegration.”

Whatever the final legal disposition of this particular case against this particular institution and its staff, it is important to understand that sexual abuse often occurs in medical facilities, with sexual predators often in positions of authority. But even when the abuse is not committed by a person in authority, the institutions themselves have a legal obligation to those patients/residents who trusted them to provide help.
A medical facility could be considered negligent if:

Unfortunately, based on more than forty years of experience dealing with sexual and physical abuse, we know that, in the time that elapses between the abuse and the reporting of it, evidence can be lost, including facts falsely accused parties can use to defend themselves.
(In fact, the co-founder and executive director of the Hope Center believe he is being falsely accused.)

Meanwhile, as our Indiana personal injury attorneys are so aware, human trafficking in Indiana continues apace, with the National Human Trafficking Hotline receiving more than 2,500 case reports in Indiana. Women who have been rescued from human trafficking have limited employment opportunities and need help and training.

While law enforcement continues its investigation in cases where a resident or patient has made an allegation of assault or abuse, people who feel they have been injured might want to file a civil suit of their own. The purpose – to win (in the civil courts) compensation to pay for the costs of medical and psychological treatment.

By Rich Hailey and Mary Beth Ramey | Posted on October 7, 2020
View All Posts