BUSINESSES CAN BE LIABLE FOR KEEPING QUIET ABOUT HUMAN TRAFFICKING 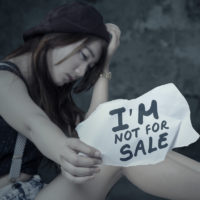 “Local communities are the most affected by this abhorrent crime,” the U.S. Department of State warns in its Trafficking in Persons Report 2018, and “we need to become more vigilant.” The Department calls on:

to be on the alert for signs of trafficking.

First, what exactly is the crime of human trafficking? It is the act of compelling a person’s labor, services, or sex acts. The crime can involve smuggling victims across international borders, or coercion of a child in his or her home town. An estimated 20.9 million adults and children are bought and sold worldwide, forced into sex slavery or forced labor.  One of the many myths about human trafficking, our Indiana Attorney General explains, is that it does not occur in the United States and does not affect U.S. citizens. In reality, he explains, this exploitive violent, criminal industry places an estimated minimum of 300,000 American youths at risk of becoming victims of commercial sexual exploitation.

Federal criminal law sets punishments, but victims can also recover damages through civil lawsuits, filing claims against those who hurt them.  At Ramey and Hailey Law, we are joining forces with law professionals in other states to come at the problem of human trafficking in a unique way – targeting business entities that profit financially from human trafficking, hitting those businesses where it hurts – their pocketbooks. What do we mean?

U.S. law (The applicable federal law is the Victims of Trafficking and Violence Protection Act or TVPA, originally enacted in 2000) creates corporate liability for entities, such as hotels, casinos, restaurants, and truck stops that benefit from human trafficking if they know or “should have known” about such exploitation and did nothing to alert the authorities or prevent sexual exploitation of minors. A multinational hotel chain, for example, can be sued for millions of dollars if hotel receptionists, concierges, cleaning personnel or room service staff members who witnessed signs of potential exploitation such as control or force, flow of numerous men to visit a female guest or a guest paying in cash and refusing to show an ID were discouraged from “saying something”.

Here in Indiana (where we are part of the U.S. Department of Health and Human Services Region V), top venues for sex trafficking include residences, hotels/motels, escort services, and illicit massage/spa businesses. The relevant Indiana law is Indiana Code Title 35. Criminal Law & Procedure § 35-42-3.5, which names trafficking as a Level 4 felony.  That law forbids:

As personal injury attorneys in Indiana, we have been helping hundreds of victims of sexual abuse find their way to a new start. We are gratified that a recently passed bill removes immunity for illegal content posted on the Internet. The law now creates civil liability for social media companies that benefit from human trafficking.  The Allow States and Victims to Fight Online Sex Trafficking (FOSTA) amended the Communications Decency Act of 1996, allowing victims of human trafficking to bring civil claims against social media companies.

Under the combination of these two laws, TVPA and FOSTA, victims may bring action against any business that benefits from a venture they should have known was involved in trafficking. The courts can now award damages, as well as attorney’s fees to victims, and even impose punitive damages in the millions of dollars on the corporations that “stood silently by”. As we  at Ramey & Hailey offer compassionate, personalized counsel to victims and their families, we are keenly aware that recovering damages in a lawsuit against a motel or hotel chain, a spa conglomerate, escort service or social media company cannot undo the harm that has been done.  What taking business entities to court CAN do is ease the financial burden on the victims, and just possibly, put a stop to profiteering from human suffering.