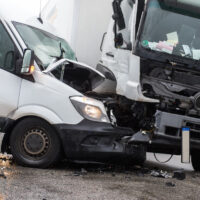 Traffic around the Indianapolis area has fallen considerably, almost certainly, IndyStar reporter Ethan May observes, due to changes brought on by the attempt to stop the spread of the coronavirus. With many Hoosiers laid off and many students going to school only part-time, it’s natural that auto traffic has decreased on our streets. “Fewer drivers on the roads means fewer collisions,” Kara Kenny of WRTV agrees. Meanwhile, IMPD reminds drivers not to be tempted to go faster just because there is more room on the road, and that “when they drive for nonessential things they’re putting police and first responders at risk”. As IN.gov explains, law enforcement officers are required by Indiana Code to investigate and submit a written report for each motor-vehicle rash that results in injury, death, or property damage of at least $1,000.

One traffic-related risk that has certainly increased in recent months involves delivery trucks and vans. While the Federal Motor Carrier Safety Administration (FMCSA) has yet to publish 2020 statistics, in 2019, there were 181,044 crashes nationally involving large trucks and buses, with 97,165 injuries and 5,024 fatalities.

According to the Indiana Criminal Justice Institute, it is driver-related actions for both commercial and non-commercial vehicles that account for 94% of collisions involving commercial vehicles. The primary factors include unsafe lane movement, improper passing and turning, following too closely, unsafe backing, failing to yield and speeding too fast. With the enormous increase in online commerce, there has been a commensurate increase in traffic involving delivery vehicles.

At Ramey & Hailey Law, we know one thing: Whenever a commercial truck, weighing 30,000-80,000 pounds, collides into a, 5,000-pound passenger vehicle, catastrophic injuries and deaths are likely to occur. What’s more, the results of the typical car/truck accident are often horrifying; it is not uncommon for those who survive to suffer, brain damage and paralysis.

After more than 40 years helping victims gain reimbursement for their medical bills and for months, even years, of missed income, we often find that the trucker is employed by a large, multistate commercial trucking company that is represented by a large legal team experienced in protecting the company from liability. For that very reason, it is crucial for accident victims to be represented by legal counsel experienced in truck/auto vehicle claims.