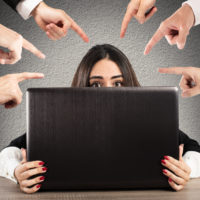 It’s all over the news when a teacher is found to have been involved in an inappropriate relationship with an underage student. In fact, in my line of work, which includes helping victims of sexual assault and abuse, I’m used to hearing stories about “inappropriate relationships” of all kinds. I couldn’t agree more with Christina Hale’s words in the Indianapolis Star, “We must stop describing these problems and get to work on preventing them.”

But what happens when the “abuse” goes the “other way”, when it’s the adult whose life is damaged by the actions of a minor? “On September 28,” IndyStar reported, “Ben Slaton made a serious error in judgment that directly damaged two lives.” Before the incident, the story continued, Slaton, star quarterback at Plainfield High, had already begun receiving offers from Division I college football programs. All that changed after the student shot – then posted on Snapchat – an inappropriate picture of one of his female teachers. Slaton was originally given a three-day suspension, then expelled for the rest of the semester.

IndyStar quotes Dr. Anne Lewis, licensed counseling psychologist, who reminds readers that “the victim in this case is the teacher. She can’t control where that photo gets sent and that’s where the real violation comes in.” As a personal injury attorney, I particularly appreciated Lewis’ description of the traumatizing effect that such an incident can have on a teacher: “It can change the type of clothes she wears to work.  It takes away some of her freedom.”

“If there is a lesson here – beyond not taking an inappropriate photo in the first place – it might be how one mistake, compounded by the power of social media, can change numerous lives.” IndyStar reporter Kyle Neddenriep concludes.

The sharing of inappropriate information and cyber-bullying are growing forms of personal injury, and those abuses are not limited to children. Negative, threatening, and inappropriate comments posted on or linked to social media accounts cause harm, sometimes lasting harm, to victims. “When our digital space is invaded with sexual harassment, violent messages, and threats; when our private data, information, and photographs are exposed, it feels like it should be against the law,” Marlisse Silver Sweeney writes in The Atlantic.

Here at Ramey & Hailey, we’re hoping this story of an “innocent” prank will serve as a wake-up call. “Cyber-shaming”, like sexual abuse, has the power to rudely and brutally push people’s lives off track. Along with parents of child sex abuse victims, adult victims need answers to the questions “So what can I do about it?” “If I don’t speak up, will this happen again to someone else?”