DO AUTO DRIVERS HAVE THE POWER TO REDUCE THE PERILS PRESENTED BY TRUCKS? 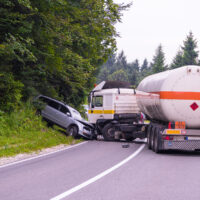 But isn’t driving, in fact, quite perilous? Most deaths in large truck crashes are passenger vehicle occupants, explains the Insurance Institute for Highway Safety, offering several reasons why drivers and passengers in cars face considerable peril from trucks:

Still, as several experts who spoke with IndyStar advise, there are steps drivers can take to defend against accidents caused by trucks:

If, despite all these precautions, you or a family member is involved in a semi-truck or commercial truck accident, understand that the process is not going to be the same as a car accident injury claim. At Ramey & Hailey personal injury law firm, where we have been representing truck/auto collision injuries for more than 40 years, we know that injuries from a truck accident tend to be much more severe, with significant medical bills and months or even years of missed income. The trucker, in contrast, may be the employee of a multistate or even international conglomerate represented by a large legal team determined to pay as low an amount as possible.

As an auto driver, you do indeed have considerable power to reduce the perils presented by trucks on the road. But as the statistics cited in the IndyStar clearly demonstrate, crashes continue to cause serious injuries to auto drivers and their passengers. Those drivers and passengers are going to require some very serious legal help getting the compensation they need.