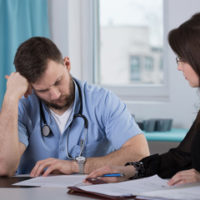 Many physicians are doing just that, turning to the lawyers at Ramey & Haley for advice dealing with hiring of doctors and with discipline issues that are increasingly arising as the law continues to evolve. The story begins when a complaint is filed about a medical practitioner, claiming that he/she:

Then, based upon the laws and rules specific to that person’s profession, the appropriate board of the Indiana Professional Licensing Agency may impose discipline on that medical professional.

“It is never our intention to inhibit the practice of business in Indiana. However, in the unfortunate situation where the Indiana Attorney General seeks action in a case, it is our duty to comply with the highest standards of fairness, justice and uphold the laws that keep Hoosiers safe,” the PLA website explains.

In one recent Indiana case, the following ruling was issued:

While such disciplinary measures are designed to protect the public, such strict disciplinary measures have severe ramifications for “the respondent” as well. Not only will the practitioner’s livelihood be cut off during the probation period, but the proceedings have the potential to inflict permanent emotional as well as financial damage on that doctor as well.

In fact, fear of those very harsh punitive effects has become a factor in the “war on drugs”, in that physicians have been reluctant to prescribe adequate amounts of controlled substances for pain because of the potential for investigation by the state medical licensing board, as Macron Jones explains in the Indiana Law Review. “Numerous studies have connected fear of regulatory scrutiny and ambiguous standards directly to incomplete pain treatment.”

The attorneys at Ramey & Hailey have been representing medical healthcare professionals on an assortment of legal challenges for almost three decades. The majority of these cases have been centered on credentialing issues and disputes that arise from the new corporate medicine model.

With their livelihood at stake, medical professionals need to consult with an experienced trial attorney. Certainly professionals have an undeniable duty to comply with the highest standards of fairness and justice (as the Indiana Medical Licensing Board aptly explains).