EXACTLY WHO CAN BE PROVEN NEGLIGENT IN A SCHOOL BUS ACCIDENT? 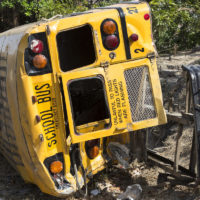 Once a bus begins rolling down the road, a child is, statistically speaking, safer inside the bus than outside it, observed USA Today reporter Greg Toppo.

As personal injury attorneys, we observe the same thing when we are called upon to help families of school-transportation-related crashes. In several recent Indiana school bus-related incidents, for example, the children hurt or killed were not actually on a school bus, but were either waiting for a bus or in the process of boarding. After an accident like this happens, and there is catastrophic or permanent loss caused by driver or equipment error, insurance often isn’t nearly enough to compensate. Our role at Ramey and Hailey then becomes seeing to it that our clients get the recovery they deserve through the legal system.

Generally, after an accident, fault is determined by the law of negligence. But who was negligent?

Was the school bus driver negligent? The driver of another vehicle involved in the crash?

Was the school bus manufacturer negligent? Because of the size of a school bus and the number of passengers a bus holds, accidents can be severe. Manufacturers are therefore subject to additional safety rules and guidelines.  For example, roof failure can happen when the manufacturer fails to follow the guidelines requiring that the roof sustain no more than 5 inches of “roof crush” while supporting 1 ½ times the vehicle’s weight.  There are special tests that must be applied to the vehicle’s emergency exit doors and window, etc.

Was the governmental (city or township) entity that owned the bus negligent? There are special procedural requirements when bringing a lawsuit against a public entity.

“Bus crashes can happen because of bus driver error, bus company negligence, another driver’s negligence, the weather, or equipment failure,” InjuryClaimCoach.com explains. Every state has deadlines for resolving personal injury claims, and the rules are different for governmental claims.

“Bus accidents are not incredibly common, but when they do occur, they can have devastating results,” writes Sherwin Arzani in Best Lawyers in Canada. Buses are generally more difficult to maneuver, harder to stop, and less safe than other vehicles, he adds, and they are lacking seatbelts and airbags.

Liability for negligence occurs when one person breaches a duty of care to another and injury results.  But exactly who is it that can be proven negligent? Over the past 40 years, the attorneys at Ramey & Hailey have been helping figure out the answers to that very question and fighting for victims of school bus accidents to get the compensation they need.