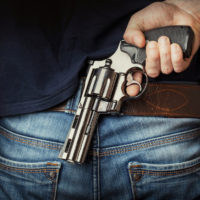 There are more guns than people in the United States, a global small arms survey revealed. In fact, while Americans make up only 4% of the world’s population, the study showed, we own nearly half of the entire global stock of firearms! The bad part, as a new study in the Journal of the American Medical Association shows, is that America is one of six countries that account for more than half the gun deaths worldwide.

When gun violence causes injury and death, just who is it that can be held liable? As personal injury attorneys in Indiana, we know finding the answer to that question is a complicated process. If you or someone close to you was unintentionally injured by a firearm, there may be financial recourse available.

Was it THE GUN ITSELF that caused harm because it was “defective”? Under product liability law, you may recover a settlement from the gun manufacturer, the gun seller, the distributor, or the gun owner.

If the injury was caused by A PERSON’S NEGLIGENCE in storing or handling the gun, you might recover a settlement under gun liability laws. And, if a loved one died in a gun accident, their estate may have a wrongful death claim against the gun owner.

When the injury was inflicted intentionally, there may be several parties that can be held liable in addition to the actual shooter.

Was the GUN SELLER negligent? Did store employees know, for example, that the sale was illegal in terms of the buyer’s age or criminal background?

Were the PARENTS OF A MINOR who committed gun violence negligent by failing to supervise their child or fail to keep guns and ammunition out of the hands of their child?

Is THE SCHOOL liable when there is a school shooting?

At Ramey & Hailey, gun violence is much more than a matter of statistics.  In fact, one of the purposes of this personal injury blog is to reach innocent folks whose lives have been thrown off track after they were victims of a gun accident. The law failed to protect them from harm, and now they (and too often, their survivors) need a shoulder to lean on, someone with the experience and legal knowhow to help in the recovery.

There are  many cases well publicized in the media that illustrate just how important it is for those injured by gun violence to seek counsel from an experienced attorney team.  Just two illustrations include:

In a landmark case originating ten years ago, an 18-year old shot and seriously injured two police officers in Milwaukee.  A jury in Milwaukee County Circuit Court found that the owner of the gun store had been seriously negligent in selling that gun to an ostensible purchaser who was ”fronting” for the shooter who at the time was too young to legally purchase the firearm.

Federal law provides that victims wounded with a weapon can pursue civil damages if the seller of a firearm knew, or should have known, that the transaction was illegal, or that it would very likely pose a danger.

After a recent school shooting in Noblesville, Indiana, the parents of a 13-year-old girl who was shot seven times by a classmate at a suburban Indianapolis school are suing the young assailant’s parents.  The lawsuit alleges the boy’s parents failed to prevent him from accessing guns and ammunition at his home. The parents knew or should have known that the boy had unusual and potentially violent propensities, the complaint said.  The family is suing for damages on two counts: negligence and strict liability.

When gun violence causes injury and death, just who can be held liable is a complicated matter. Our dedication at Ramey & Hailey is to seek financial recourse for victims or their survivors.