FILING A COMPLAINT WHEN INJURED ON A COMMON CARRIER 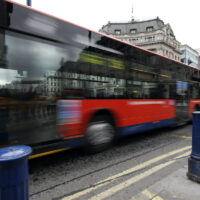 With the brand new rapid transit Red Line service launched only days ago in Indianapolis, it’s important to understand how to stay safe when riding a “common carrier” – and what recourse riders have in the event an injury happens.

There have already been incidents of automobiles involved in crashes with IndyGo Red Line buses. Remember, too, the system includes not only the buses themselves, but also the platforms and ramps; accidents and crime incidents can occur there as well as on the vehicles themselves. Whether you walk, ride the bus, or drive a car in Indianapolis, you’ll likely be affected by the Red Line, WIBC commented.

The term common carrier refers to companies that transport goods or people, and includes all forms of transit vehicles, including:

Since at Ramey & Hailey Law we represent people who have been involved in common carrier accidents, we were particularly interested in the plans for the Red Line. As Indianapolis Metropolitan Police Department spokeswoman Wishner said, “It is important for Indianapolis drivers to “avoid situations where confusion delays someone from receiving life-saving assistance, or when the situation causes an accident.”

If you get hurt while on public transportation, you might be entitled to make a claim against the public transportation company that runs the transport line. In fact, the Indiana Supreme Court has ruled that, while a bus company cannot insure passenger safety, it must exercise the highest degree of care to secure their safety. After all, in choosing to ride, the passengers have entrusted their safety to the bus company.

In a crash between two vehicles that are not common carriers, (cars and trucks, for example), “comparative fault” is assessed.  If a party is found to be 80% at fault for the wreck, they pay only 80% of the injured person’s damages. But, when it comes to a common carrier (such as a bus company), even if they were responsible for only a small percentage of the fault, they can still be assessed 100% of the responsibility, as Fred Schultz explains in lawyers.com.

The challenge, as we at Ramey & Hailey well know after more than forty years filing lawsuits on behalf of injured parties, is proving liability.