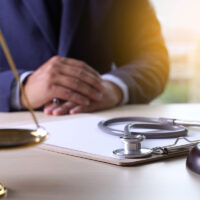 Medical malpractice doesn’t always consist of a big mistake or a wrongful action taken. Often malpractice involves something not done, or at least not done in time.

Back in November of 2016, S. C. noticed she was experiencing blurred vision. Very worried, S. wasted no time consulting a physician, who diagnosed the problem as a combination of conjunctivitis (“pink eye”) and pneumonia.

Two days later, the vision in S.C.’s right eye was so impaired that she rushed to the emergency room at Community East. There, S.C. was examined by several physicians, who provided no treatment, referring her to ophthalmologist Dr, L. of Eye Surgeons of Indiana. Although Dr. L. was on call that very day, he did not come to the hospital, but spoke to S.C. by phone, prescribing no treatment. Since it was a Friday, the start of a weekend, Dr, L. scheduled S.C. for a visit to his practice the following Monday.
When S. C. visited the Eye Surgeons of Indiana office on Monday, she was treated by Dr. H, who administered four shots directly into her right eye, also taking testing specimens from the eye. The patient has prescribed eye drops and instructed to return in a few days.

Over the following few days, S.C.’s condition was much worse; she was admitted to Eskenazi Health Hospital. A diagnosis was made of endophalmitis (a severe infection), and the patient’s right eye had to be removed.

As personal injury attorneys in Indiana, we at Ramey & Hailey Law have been called upon to represent S.C. in her efforts to recover compensation for the cost of medical treatments, therapies, and time missed from work, as well as for non-economic damages such as pain and suffering and emotional distress.
Different entities may be liable for medical malpractice, including:

Providers – in this case providers include the doctor to whom S.C. first complained of blurred vision, the doctors who examined her in the emergency room, the eye surgeon on call

Facilities – the hospital or other facility where the negligence occurred may be liable for the negligent actions or omissions of its employees. In this case, that includes Community Health Network

Just as in the tragic chain of events described by Benjamin Franklin, “little” omissions and errors turned out to be catastrophic for a patient whom medical practitioners are sworn to serve.