HANDS OFF THE CELL PHONE AND ON THE WHEEL – THAT’S THE LAW! 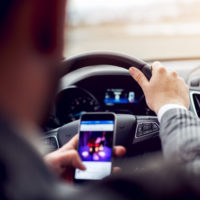 Where does Indiana fall in this distracted-driving-by-cell-phone prevention picture?

Does banning texting while driving make a difference? That was a question discussed by CBS News two years ago, after a report published in the American Journal of Public Health indicated that bans on texting while driving may in fact be preventing some serious traffic accidents. Specifically, in states where texting bans were “primarily enforced”, hospitalizations for travel accidents went down.

In our work as personal injury attorneys, the fact that Indiana is a “fault” state becomes very important when we represent someone hurt in an auto accident. In “no fault” states such as Kentucky, each driver’s insurance will typically pay for his or her own injuries, regardless of who was at fault for the accident. Indiana law, however, holds each driver accountable for his or her role in the accident, assigning a percentage of fault to each driver.

So, if witnesses testify (or it is otherwise discovered) that one of the drivers was texting or talking on a hand held phone immediately prior to the accident, a large percentage of the fault, if not all of it, will probably be assigned to that driver. (As you may imagine, even though that driver’s insurance company will pay the bills, it’s not likely they will continue to keep him/her as a customer!)

It’s a fact: Hands off the cell phone and on the wheel – that’s the law!