HOLDING THOSE ACCOUNTABLE FOR PREVENTABLE HARM 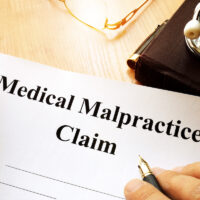 A CSF (cerebral spinal fluid) leak occurs when fluid leaks from the brain into and through the nose. Such a leak can be very dangerous, explains the Johns Hopkins Medicine website, resulting in headaches, nasal drainage, visual disturbances, tinnitus (ringing in the ears), and even meningitis. Leaks can occur after head injury – or after brain or sinus surgery…

Medical professionals have a duty to provide adequate care for their patients, and when that standard of care is breached, we at Ramey & Hailey Law are sometimes called upon to investigate and hold those liable accountable to patients who have suffered preventable harm. Here’s the story of one such patient…

Mrs. B. was referred to the otolaryngology clinic because of recurring sinusitis. After a CT scan revealed cysts plus an air-filled“ concha” obstructing the nasal passage, Dr. P. performed surgery, reporting “no apparent complications”.

It soon became apparent that there were, indeed, complications, because Mrs. B began expelling copious amounts of fluid from her left nostril. A new CT scan revealed a cerebral spinal fluid leak, and second surgery was performed by Dr. P. to repair the leak. A week later, however, Mrs. B. came to the hospital emergency room complaining of sore throat, cough, and nasal discharge. She was scheduled for a follow-up appointment with Dr. P, which the doctor cancelled. A physician at Dr. P’s clinic recommended that the ER physician refer the patient to IU Health.

As a result of the initial surgery performed by Dr. P., the patient was subjected to two subsequent surgeries, along with numerous tests and trips to hospitals and physicians’ offices. While, now three years later, she appears to have reached maximum medical improvement, she has lost her sense of smell.

Under Indiana Law, a Medical Review Panel must first be convened before a medical malpractice lawsuit can be filed. In this case, the panel found that Dr. P. had created a defect during the first operative procedure which resulted in a leakage of cerebral spinal fluid into the patient’s nostril. Then, Dr. P. had discharged the patient from the hospital, thus preventing the covering doctor from conducting a comprehensive evaluation of the patient’s condition.

It became obvious that Dr. P. had fallen below the standard of care to be expected of a physician specializing in otolaryngology. The otolaryngology clinic is also responsible for the acts and omissions of the medical personnel it employs.