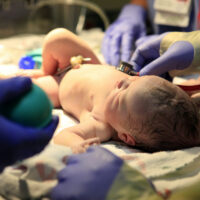 At trial, experts testified that Tequila Snow’s firstborn would have been a healthy child if staff members at West Suburban Medical Center in Oak Park, Illinois had properly done their jobs.

When Ms. Snow arrived at the hospital, fetal monitoring was initiated, but then mother and baby were ignored for five hours. Meanwhile, the baby was starved of oxygen. By the time an emergency Caesarian delivery was performed, it was too late for little Gerald Snow, who now cannot speak or care for himself in any way, and who needs medical attention 24 hours a day.

Birth injuries can occur at any point during the birthing process–during the pregnancy, delivery, or right after the birth. When, as in the case of Gerald Snow, either the doctor or medical professional fails to detect the early warning signs indicating that there may be complications with the baby at birth, or when they fail to take the proper procedures at delivery to reduce or prevent injury, the mother or infant can be severely injured or even die.

Many birth injuries are preventable if proper medical attention, care, and treatment are provided to the mother and her child during pregnancy and at delivery. If the level of care falls below this standard, parents may be able to recover damages, including medical bills, rehabilitative costs, and other expenses, from the medical practitioner who was responsible and/or from the institution where the negligent care occurred.

Why did the jury decide to award such an unusually large amount of money to this mother? “Gerald is different today than he would have been had these health care providers done their job, but this verdict ensures that he will at least have the proper medical care for the rest of his life and that he will be with his mother,” the attorney for Tequila Snow explained.

Snow had taken care of her son at home for four years before bringing him to a facility that helps provide care for people with mild to severe developmental disabilities, because she couldn’t afford his care. “He will now be able to come back to live with me at home,” Snow said to reporters Emmanuel Camarillo and Carly Behm from the Chicago Sun-Times.

Helping parents gain the means to cover the lifetime care of children who suffered life-changing injuries during birth – that is an important part of our mission at Ramey & Hailey Law.