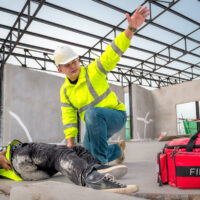 “Statistics show accidents, injuries, and deaths are on the rise,” CBS New York reports, remarking that “construction has become the deadliest job in New York City”. Ironically, this comment was published just days following news about the collapse of the Seattle crane that left four people dead, and on the very same day news broke of the $7.8 million settlement reached in a case involving a Philadelphia construction worker’s fall. “The general contractor violated OSHA standards and their own safety policies, resulting in a devastating accident that will have a lifetime impact on a decent, hardworking man,” the attorney for the Philadelphia worker, who had been injured while sandblasting and painting a bridge.

According to (OSHA), approximately 20% of worker fatalities in private industry happen in construction, with the main causes of death being:

Under OSHA regulations, employers have a number of obligations, including:

If you or a family member has been hurt in a construction accident, your ability to recover damages will depend on whether these safety regulations were followed. Ramey & Hailey personal injury clients are reminded that more than one party may bear some responsibility, including:

Whether or not workers’ compensation is involved, making a personal injury claim can be a long and complicated process. In the recent Seattle crane accident, for example, five different companies are under investigation, and the Washington State Department of Labor & Industries spokesman said it may take up to six months to complete that investigation process.

We know, because, although our firm is based in Indianapolis, Indiana, the attorneys at Ramey & Hailey represent clients throughout the nation in a variety of serious personal injury and complex litigation matters, including construction accidents.