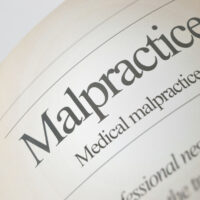 Often, at Ramey & Hailey Law, by the time we are speaking with a patient – or with that patient’s survivors – about personal injury as a result of medical malpractice, many months or even years have passed since the unfortunate set of events that caused them so much sorrow. Typically, those clients had never suspected that malpractice was the cause of their woes. Our function as lawyers is to assist, to research, to investigate, and, when there has been malpractice, help those families attain the compensation they deserve. The People’s Pharmacy column shown below was reproduced in the Oct. 1, 2020 issue of the Indianapolis Star. While our attorneys have no involvement whatsoever in this case, we have pinpointed some valuable lessons to be gained by our blog readers in studying the story.

Q. My healthy husband went for a physical because he was going to retire.

him on amiodarone. Within a few months, he could not function and went in

for a cardioversion. They said he was not getting enough oxygen, and he was

admitted to intensive care for three weeks. There, they diagnosed him with

lung poisoning from the drug. He was intubated and never woke up. My beloved

husband died, and I deeply regret watching him take that drug each day.

A. Your story is tragic and should never have happened. Amiodarone hasn’t been approved for treating atrial fibrillation. The Food and Drug Administration says the drug must only be prescribed for life-threatening heart rhythm abnormalities such as recurrent ventricular fibrillation.

“If your doctor prescribes you the wrong medication and it ends up causing you harm, you could have a valid claim for medical malpractice,” Prathyusha Chowdri writes in nolo.com, adding that these kinds of cases are very complex. In order for a lawsuit to be viable, Chowdri explains, you must prove that the doctor’s actions amounted to medical negligence.

The U.S. Food and Drug Administration estimates that some 1.3 million people in the U.S. are injured each year as a result of medication errors. The error can take several forms:

There are different parties who might be held responsible, including:

Injured victims of medical negligence or medical error can begin by talking about their situation with one of our personal injury attorneys. With more than 40 years of experience in the medical malpractice field, we can help determine the appropriate course of action to take if in fact there is a medical malpractice issue. (Note that the case described above was brought in the state of Massachusetts; cases brought under the Indiana Medical Malpractice Act are subject to different rules.