IN THE NEWS: HISTORIC POLICE REFORM AND TRAINING BILL SIGNED INTO LAW 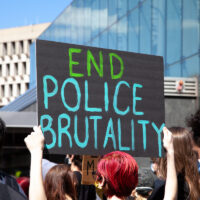 House Bill 1006, the police reform and training bill signed into law only last month by Indiana Governor Eric Holcomb has been called “historic” by lawmakers of both political parties. The bill:

The bill enjoyed overwhelming support, Richard Hailey believes, largely because it reflects the results of discussions with the Indiana Black Legislative Caucus, including activists, police officers, and residents. In an interview last fall by the President of the Indiana Trial Lawyers Association, Hailey remarked that he views the future of race relations in Indiana in a very optimistic light. At the same time, he is concerned about Indianapolis’ violent crime problem. In a presentation to the Marion County Bar Association, Hailey voiced his grave concern that increased policing of specific high crime neighborhoods might result in people of color being disproportionately subjected to forceful tactics. “We are lawyers, after all,” Hailey observed, “devoted to the law, and when lawlessness grows in our city, we are outraged. On the other hand, the “task” of any police force, he stresses, is to protect citizens against brutality.