IN THE NEWS: MESOTHELIOMA TRIALS MOVE AHEAD, PANDEMIC NOTWITHSTANDING 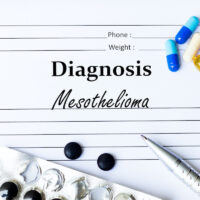 Mesothelioma (tumors on the lungs) is hardly a new disease. The term “mesothelioma” itself was coined more than a hundred years ago, then linked to asbestos exposure in the 1940s, asbestos.com explains. From the standpoint of personal injury law, mesothelioma presents a unique challenge: after a person has been exposed to asbestos, it can take decades – sometimes as long as 60 or 70 years – for this deadly form of cancer to develop.

By way of background, asbestos is a naturally occurring mineral dug out of the earth’s surface, which is then refined into fluffy fibers. Asbestos became popular in the building industry because of its strength, resistance to heat and chemical damage, and so was often used to insulate pipes. In addition, the substance was used in the shipping industry and in auto brake and clutch linings. That meant that workers in many industries were exposed to high levels of asbestos. Beginning in the 80s, increasing numbers of asbestos-related personal injury lawsuits, including class action lawsuits, began coming before the courts.

Earlier this year, the coronavirus pandemic had put a temporary hold on court cases in general, in the effort to keep plaintiffs, defendants, jurors, lawyers, judges, witnesses, and court reporters safe from spreading the disease. As the legal profession has embraced video conferencing technology, it has again become possible to move forward with jury trials.

As a victim of asbestos exposure, you have a right to file a mesothelioma lawsuit against the responsible parties. With more than 40 years of experience, at Ramey & Hailey, we focus on helping victims and their survivors seek damages from the companies that, although aware of the dangers, allowed their workers to be exposed to cancer-causing asbestos levels.

We explain to clients that, in a mesothelioma lawsuit, compensation can be sought from several different sources:

Just last month, at the conclusion of a big California jury trial, conducted entirely through video conferencing, a Navy veteran was awarded $2.5 million in a lawsuit against Metalclad Insulation Corporation, manufacturer of the insulation used on many Navy ships during the Vietnam war. The company, it was discovered, knew the risks associated with their products and failed to make its customers aware of the dangers.

Although Metalclad requested a mistrial, claiming that the virtual arrangement did not allow a fair hearing of their defense, it was ruled that, in light of the pandemic, mesothelioma trials can and should move forward using video conferencing.

Ramey & Hailey is proud to have been at the forefront of embracing new technology and moving forward in helping personal injury victims.  In fact, Richard Hailey co-chaired, planned, and participated in a webinar focused on technology and techniques for conducting legal depositions in a remote COVID-19 environment.