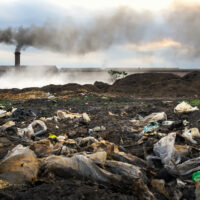 Toxic cancer-causing contamination in Franklin may have spread, the Indianapolis Star reports.

Over the past five years, both federal and state agencies, overseen by the U.S. Environmental Protection Agency, have been conducting testing in and around Franklin, beginning a cleanup of sewer systems and surrounding soil.

A big concern is that, since 2008 at least 58 cases of childhood cancer – often rare forms of blood and brain cancer – cancer have been found in Franklin and surrounding towns; community residents believe the cancer is related to pollution emanating from a former industrial site. In fact, the Indiana Department of Environmental Management has set a safe limit for TCE and PCE, both cancer-causing chemicals. Tests done by an environmental consulting firm found levels hundreds of times higher in the sewer system in and around Franklin.

At Ramey & Hailey, we have been following the news about pollution in Franklin, Indiana very closely. We point out to clients that any activity which creates a substantial interference with your right to use and enjoy your property is termed “a nuisance” and can be dealt with through legal channels. Your property includes not only the land itself, but also the air above it and any water present. Chemicals that cause cancer in children are much more that a nuisance! Whether you have suffered damage to your property or damage to your health, our attorneys can protect and defend you.