IN THE NEWS – ONE WEEK, FOUR MOTORCYCLE ACCIDENTS 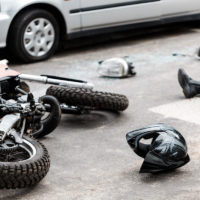 On Indianapolis’ south side this past Sunday, 23-year old motorcyclist Kyle Leatherberry died from injuries suffered in a crash with a vehicle.

A day before that, 27-year old motorcyclist Kayla Gullett crashed into the rear end of a car stopped by a prior crash on Interstate 70. She died at the scene.

One night earlier, 42- year old Jerry Crawford died when his motorcycle hit a fallen tree around 11:15 p.m. on McCarty Street. Neighbors said the tree had come down during Thursday’s storms and that they had reported it to the city.

A second motorcycle fatality happened that night on the near north side of the city, when a motorcyclist crashed into a parked truck.

Hard to fathom, but all those accidents happened in the course of less than a week! And the frightening fact is, more than 80 percent of all reported motorcycle crashes result in injury or death to the motorcyclist! Many laws exist to protect victims of motorcycle/vehicle collisions, and at Ramey & Hailey Law, we are experienced in helping accident victims recover compensation for their losses.

“Motorcycle accidents can leave victims saddled with medical expenses and other related debt, while also limiting their ability to earn income. If they are permanently disabled, loss of income could last the rest of their lives,” Consumer Safety reminds readers.

As motorcycle accident attorneys, we will do an independent investigation of the facts to determine which parties were liable. When insurance isn’t enough to compensate for the losses, we are there to see that the injured get the money they need to cover their medical costs and loss of earnings (or that the survivors are compensated for the loss of that person’s support).