IN THE NEWS: PARENTS OF BUS ACCIDENT VICTIM AWARDED $20 MILLION 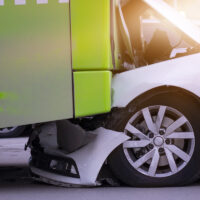 At least 77% of traffic accidents are the result of driver error, rather than equipment failure or external conditions, Safety Insurance explains. Accidents involving large buses or other “common carriers” can be very serious, often involving fatalities. As personal injury attorneys dealing in auto accident cases for more than forty years, we work extensively on accidents resulting in catastrophic or permanent loss involving driver and equipment error. News of a recent settlement awarded in the state of Oregon was of interest to us, because it so powerfully illustrates how driver error can cause irreversible and tragic personal injury.

This past summer, 25-year-old Hunter Brown was a passenger on a Greyhound bus travelling between San Francisco, California, and Seattle, Washington. After a pit stop in Central Point, Oregon, the driver began pulling away from the station, ignoring passengers who tried to tell him others had been left behind. Trying to catch up, Brown fell under the bus and was killed.

Testimony showed the driver of the bus had exhibited erratic and unsafe behavior, stating that he was exhausted and might fall asleep, dropping off passengers without their belongings, and parking in a roadway to use the bathroom. Because of these actions, in the wrongful death suit filed against Greyhound Lines, Inc. by Brown’s parents, the company was found responsible for the negligence of its driver.

If you have been injured or lost a family member in a common carrier accident, the law entitles you to recover for such items as medical expenses, lost wages, and loss of future earning capacity. If the accident led to a death, family members can turn to  us at Ramey & Hailey, where you will find experience, knowledge and dedication to achieve a successful resolution to your case.