IN THE NEWS: PRISONER VS. PRISON – A TALE OF TWO MEDICAL NEGLIGENCE LAWSUITS 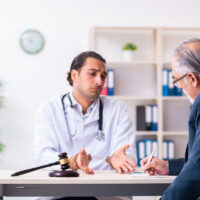 Often, when people hear about a medical malpractice lawsuit, the picture that comes into their mind is of a case brought by a patient (or sometimes by the survivors of a patient) against a doctor. Typically the doctor is accused of having made a mistake (wrong diagnosis, wrong treatment, wrong medicine), thereby causing harm to the patient.

But, as we at Ramey & Hailey know (after more than forty years of experience in personal injury law), malpractice can happen when a medical condition isn’t treated at all!

The recent ruling in the William Dean case relates to a lawsuit on behalf of an inmate against Wexford Health Sources, the company hired by Taylorville Correction Center in Springfield, Illinois to provide healthcare to inmates.

Back in 2012, Alfonso Franco had died of colon cancer after his condition went undiagnosed and untreated. More than a year after he’d begun complaining of symptoms, Franco was finally sent to a hospital outside the prison, where he died a month later. The case was settled for $800,000.

Then at the end of last year, William Dean won a second case against the Wexford doctors for failing to diagnose or treat his kidney cancer. Dean was awarded a “blockbuster” verdict of $11 million.  These two medical negligence stories have sad morals:

If someone – or some institution – has a legal duty to protect your safety and, because they failed to do that, you suffered injury, our mission at Ramey & Hailey becomes proving that acceptable medical standards of care were violated.