IN THE NEWS: RICHARD HAILEY ON LITIGATION TEAM FOR LAWSUIT VS. TESLA 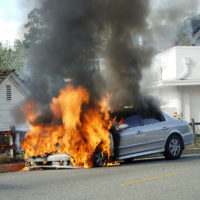 In November of 2016, Kevin McCarthy died while trying to escape a Tesla vehicle that was engulfed in flames. Now, on behalf of McCarthy’s widow and minor children, a wrongful death lawsuit has been filed against Tesla, claiming that known defects in the Model S automobile prevented McCarthy’ from escaping from the car…

The lawsuit, filed in Oakland, California, cites more than 100 prior instances in which Tesla Models S and X vehicles had:

The subject of this latest lawsuit is the 2015 Tesla Model S vehicle owned by Kevin McCarthy. After a business meeting downtown, McCarthy and his associate Casey Speckman drove north on Illinois Street towards Speckman’s residence, intending to pick up promotional materials needed for a business presentation they were to give the following day. The Tesla experienced uncommanded acceleration (the Event Data Recorder demonstrates that the vehicle accelerated from 10 mph to 70 mph in the five seconds before impact). McCarthy was observed alive, post-impact, attempting to escape, but was unable to do so. Extricated from the car by Fire Department personnel, McCarthy died at the hospital from thermal injuries and smoke inhalation.

Although the accident occurred in Marion County, Indiana, the lawsuit was filed in Alameda County California, where Tesla is based and where the company operates its main manufacturing facility. The complaint is “for damages for personal injury and wrongful death”, and demands a jury trial.