IN THE NEWS: RICHARD HAILEY SERVES AS CO-COUNSEL IN TRAGIC MEDICAL MALPRACTICE CASE 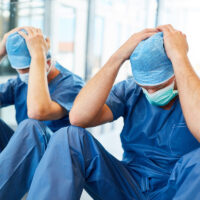 In July of 2017, 60-year old MM had undergone a “practice” surgical procedure to see whether an implant called a spinal cord stimulator (a “paddle” connected to threaded wires with electrodes) could be inserted into her spine to relieve her ongoing back pain. When MM reported a significant degree of pain relief from the interim therapy, she was referred to a surgeon for permanent insertion of a stimulator. Surgery was scheduled for October 10 of that year at the U.S. Pain & Spine Hospital.

The next three days would mark the beginning of a permanent nightmare for MM. In the time she spent in that hospital, fully ten medical professionals failed to recognize the signs and symptoms of neurologic emergency that would result in her suffering significant – and permanent physical, psychological, and financial injury.

The three medical professionals present in the operating room that day included surgeon Dr. J., anesthesiologist Dr. A., and K.D., product representative of Boston Scientific (manufacturer of the spinal cord stimulator device and the surgical lead kit used in the implantation procedure). Off site, Dr. C was the remote neurologist in charge of neurophysiological monitoring during the procedure. Dr. C. was assisted by technologist M.R.

During the surgery, which lasted approximately an hour and half, some “spurs” were removed from the patient’s spine, exposing a space into which the “paddle” was inserted and “pocket” was created for threaded wires containing the electrodes which would allow the patient to control the stimulation level of the device.

In addition to the five medical care providers mentioned above, MM’s post-operative care involved another series of five medical professionals, including recovery unit nurse E.H. , nurses C.F. and G.C., internist Dr. T, and a physical therapist, each of whom noted dangerously high levels of blood pressure, significant pain, and increasing loss of range of motion in the patient’s right hip and leg. While strong painkillers, including Oxycontin, were given to the patient, at no point did any of these ten different providers appreciate the neurologic emergency that would result in such tragic injury to their patient. No one ordered tests to determine whether it was the stimulator that needed to be immediately removed from MM’s body.

On October 13, MM was transferred (via stretcher) to a rehabilitation hospital, from where she was discharged two weeks later, then transferred to a skilled nursing facility. After her follow-up visit with the surgeon, he recommended removal of the device and decompression of the spine and those things took place on December 1 of that year.

In any medical malpractice case, an experienced personal injury attorney team can be an invaluable asset in determining the appropriate course of action to take. Because the provision of medical care is a highly technical and specialized field, expert testimony (from medical professionals who are not connected to the defendants) is required to establish the connection between the actions of these medical practitioners and the injuries suffered by the patient. There is fault, to be sure, but it must be demonstrated that the fault is shared by the hospital, as well as by the organizations those medical professionals represented, who must also be shown to have breached the proper standard of care.

The fact is, all of this work takes time. More than three years have now elapsed since MM’s nightmare began. As the case slowly proceeds to trial, MM continues to suffer from paralysis, pain, and depression. Able to get around only by using a wheelchair, she has been unable to return to work, continuing to need physical therapy, various procedures, counseling, and medication.

With Rich Hailey having more than forty years’ experience in the practice of personal injury law, all of us at Ramey & Hailey are proud that he is serving as co-counsel on this very complex – and highly disturbing – medical malpractice case.