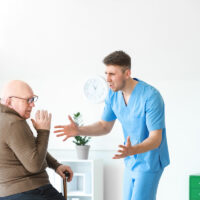 In light of recent events, with others undoubtedly in store, we thought the 2018 appeals court reversal of a judge’s 2013 ruling in a West Virginia police shooting case would be of special interest to our Ramey & Hailey NewsBlog readers….

Seven years ago, in Martinsburg, West Virginia, five police officers shot and killed a 50-year-old mentally ill black man who had been walking on the road (not the sidewalk), and who had failed to comply with policemen’s orders to put his hands on the car. Wayne A. Jones’ estate filed a $200 million lawsuit against the city, claiming the officers had used excessive force. The judge at the time ruled in favor of the Martinsburg Police Department, on the grounds that Jones had refused to drop the knife he had been carrying and had resisted arrest.

The case was appealed and, just two years ago, the U.S. 4th Circuit Court of Appeals reversed the lower court’s ruling, remanding the case back to the district court for re-examination and further proceedings. “A reasonable jury,” the higher court stated, “could consider the totality of the facts and still find that the officers exercised excessive force.”

Video evidence showed that when the officers drew their firearms, forming a circle around Jones, he had remained on the ground, making no overt acts with his knife towards the officers. The Court of Appeals faulted the district court for failing to account for those facts, and failing to draw inferences from them in Jones’ estate’s favor.

“Although we recognize that our police officers are often asked to make split second decisions, we expect them to do so with respect for the dignity and worth of black lives,” wrote Judge Henry Floyd, quoted in a recent article in the Washington Post.

Whether in West Virginia, here in Indiana, or around the globe, victims of brutality and their families can count on the attorneys at Ramey & Hailey to provide exceptional legal representation. And, when governments are responsible for accidents or injuries, they, too, can be sued. Even in cases where the actual wrong was inflicted by individual police officers, a city’s practices, customs, and policies, as well as its failure to train and supervise, can result in a deprivation of citizens’ rights.

Expect to hear more on this topic based on current civil incidents and protests, and know that our law firm is dedicated to reinforcing justice.