IN THE NEWS: RUNNING THE CLOCK ON INDIANA MEDICAL MALPRACTICE 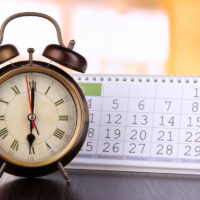 When it comes to medical malpractice cases, the personal injury attorneys at Ramey & Hailey Law are always keeping their eyes on the clock.

A statute of limitations is a state law that sets a strict limit on the amount of time you have to go to court and file a lawsuit after you have suffered some kind of harm or loss, Nolo.com explains. Indiana’s statute of limitations, for example, gives a plaintiff two years to get their medical malpractice lawsuit started.

Just when does that Indiana medical malpractice clock start running? The general rule is that the two years starts on the date the medical error was supposed to have been committed. There are a few very limited exceptions to that two-year rule, but a lawyer should be consulted before two years have past from the date of the suspected malpractice. What, exactly, is malpractice? The Indiana Medical Malpractice Act defines medical malpractice as follows:

The calendar “clock” is going to be particularly important this year in Indiana. Here’s why:

In Indiana we have a Patients’ Compensation Fund.  There is a cap on how much an injured patient can collect in compensation for a medical malpractice claim, and that cap will change in the middle of this year. Medical malpractice claims paid up through June 30 of this calendar year will be capped at $1.65 million per injury. Claims accrued after July 1 of this year will have a cap of $1.8 million.

The “calendar clock” is important in another very, very important way. Any claim from the Patient’s Compensation Fund must be paid to the plaintiff within sixty days of the of the court’s final judgment (or of the officially approved settlement).

Of course, the mere fact there was a bad outcome for a patient does not mean there was malpractice. How can you tell if your clock on medical malpractice should start running? At Ramey & Hailey the first task in working with patients and their families is exploring that question.  Was the misdiagnosis or mistake avoidable? Were appropriate testing and consultation done? Did the healthcare provider give treatment in line with “the level of care that a reasonably competent healthcare professional with similar training and in the same medical community would have provided under the circumstances”?  If the answer to that question is “no”, then you need a personal injury attorney to keep an eye on the clock!