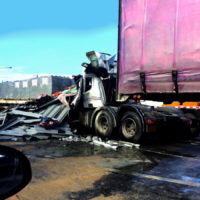 Looking once again through the windshield of his semitrailer truck (after leaning over to pick up a sandwich he’d dropped), driver Joe Robinson realized, too late, that, just ahead, there was another semitrailer sitting in slow traffic. Steering hard to the left to avoid a collision, Robinson’s semi nevertheless struck the other vehicle, causing its fuel tank to burst into flames. April Robinson, who had been in the sleeper cab of her husband’s truck, was pronounced dead at the scene, while a passenger inside the second truck was airlifted to a hospital with back and neck injuries. Ironically, neither driver was injured in the collision, IndyStar reports.

This true story happened on Interstate 70 in our own state of Indiana, just over one month ago.  Unfortunately, it is one of too many similar stories. In fact, the truck Robinson struck was slowed because of an earlier crash involving seven vehicles, a crash that left one person dead, another hospitalized.

At Ramey & Hailey, our personal injury law professionals work extensively on accidents resulting in catastrophic or permanent loss involving driver and equipment error. We know that there are five reasons trucking accidents happen:

In this particular incident, driver error (in the form of distraction of picking up the dropped sandwich) was the culprit. Robinson was not paying enough attention to other drivers and to conditions on the road.

“Distractions inside of your cab can include dialing cell phones, texting, using dispatching devices, eating, reading, or adjusting the radio,” the Federal Motor Carrier Safety Administration says, citing a 2009 study showing that 71% of large-truck crashes occurred when the truck driver was doing something beside driving the truck.

Based on our decades-long experience as personal injury attorneys in Indiana, we can tell you that, the number and severity of injuries caused by trucking accidents is posing major problems everywhere in the country, including our state. The other unfortunate insight we can share is that not all victims of truck accidents die.  Other traumatic effects include amputations, paralysis, and brain damage. That means that when we are engaged to represent those involved in a truck collision – or their relatives, we are working to obtain compensation for not only medical expenses, but lost wages, pain and suffering, loss of spousal support and/or parental guidance, plus the economic value of permanent disability.

All this over a sandwich…that’s very hard to “stomach”!