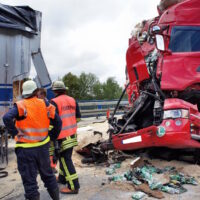 The Indiana Criminal Justice Institute reports that 138 people died in roadway crashes involving large trucks   A mere 18 of those people killed had been riding in the commercial vehicles; all the others were either passengers in cars or pedestrians. In fact, the Motor Carrier Safety Administration reports, between 2009 and 2917, there was a 40% increase in the number of fatal accidents involving large trucks and buses.

There are a number of reasons why accidents occur.  Some common causes for semi-truck accidents include:

Let’s face it – no matter how careful the driver of a large commercial vehicle tries to be, the odds on the road are definitely stacked against passenger car drivers. After all, when 80,000 pounds collides with 5,0000 pounds, it’s not a fair contest.

From a legal standpoint, something of the same inequality often holds true. While passengers in the automobile may survive, it is not uncommon for them to have suffered brain damage and paralysis. Meanwhile, the truckers are often employed by large, multistate commercial truck companies or even international conglomerates represented by large legal teams experienced in protecting their clients from liability.

For that very reason, at Ramey & Hailey, our attorneys are dedicated to helping victims of accidents involving trucks and passenger cars improve their chances of securing the financial resources they and their families are going to need.