IN THE NEWS: TWO-YEAR-OLD SHOOTS MOM IN TRAGIC REMINDER OF THE NEED FOR SAFE STORAGE OF GUNS 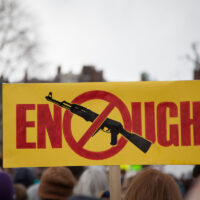 In Hendricks County, Indiana, a two year old found a semi-automatic pistol and shot his mother; a five year old sibling called for help, we learn in a recent news bulletin in the Indianapolis Star. Unfortunately, such family firearm tragedies are all too frequent. “Millions of children live in homes with guns, and many of these weapons are stored loaded, unlocked, or both,” Nationwide Children’s points out. Parents believe their children know the difference between real guns and toys, and that their child would “know better“ than to touch a gun. Both beliefs are false, as the gun injury statistics clearly show.

At Ramey & Hailey, our goal is helping the people behind the statistics, innocent folks whose lives have been thrown off track because they or someone they love has been victim of gun violence. Often these are people whom the law failed to protect from harm, survivors of gun violence who are going to need extensive medical and psychological treatment for years to come. But, in cases where toddlers get hold of guns and injure their parents or siblings, how can we “pursue” the “perpetrators”? How can we help parents whose failure to store firearms securely resulted in injury to themselves??

Child access prevention laws (CAPs), which hold gun owners accountable for the safe storage of firearms, are different in different states; there are no federal CAP laws. In Indiana, the only punishable offense is intentionally, knowingly, and recklessly providing firearms to children.

To protect our children, we need to exercise common sense safety when it comes to storing firearms!