IN THE NEWS: WHEN ‘GHOST GUNS’ CAUSE REAL DEATHS 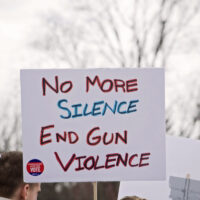 Chicago and three other cities – San Jose, CA, Columbia, SC, and Syracuse, NY – are suing the U.S. Bureau of Alcohol, Tobacco, Firearms and Explosives, demanding to halt the sale of “ghost gun” kits. “Ghosts” are self assembled guns made from parts purchased online (or at gun shows).

The legal issue: Ghost guns are not classified as firearms by the ATF, and therefore may be legally sold without background checks and without serial numbers. Since what is being sold are parts, laws regulating gun sales don’t apply. The real issue: Once assembled, these ghost guns are increasingly used to commit crimes.

Sales of do-it-yourself gun assembly kits, also known as “80 percents” have been steadily rising, with an especially notable increase during the pandemic. Why the moniker “ghost”? Guns recovered at crime scenes can’t be tied to their owners. “They might as well be traced to a ghost,” writes Katherine Snow Smith in the Legal Examiner. “Ghost guns are a growing threat to public safety, and they are turning up at crime scenes from coast to coast.”

Spearheading the lawsuit against the U.S. Bureau of Alcohol, Tobacco, Firearms and Explosives in California are two fathers whose children, along with other students, died in a shooting at Saugus High School involving a ghost gun, The Signal of Santa Clarita Valley reports.

As personal injury attorneys in Indianapolis, we’re all too aware of the grim statistics of shooting deaths in this city. Outraged by the needless deaths, we are even more concerned for the survivors, who will need extensive physical, mental, and financial help, in many cases for the rest of their lives. At Ramey & Hailey, our goal is reaching out to those whom the law failed to protect from harm, helping them gain help through our civil court system.

In the United States of America there are plenty of guns, with plenty of laws, both federal and state, governing gun manufacture, gun sale, and gun use. Even with all this preventative power, there is plenty of gun violence. With the alarming increase of crimes committed using untraceable “ghost guns”, the task of keeping innocent people safe from harm has become even more daunting,