IN THE NEWS: WHEN POLICE DOGS CAUSE PERSONAL INJURY TO THE INNOCENT 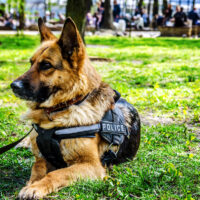 “The Indianapolis Metropolitan Police Department, home to one of the largest K-9 units in the country, has the highest rate of dog bites among police departments in the largest 20 U.S. cities,” the Indianapolis Star reports. A police dog is trained to bite. Harder. Faster. With little reservation. Meanwhile, at least 65% of those bitten were unarmed and did not act violently, reporter Mykal Mceldowney stresses.

Legally, the use of a police dog is justified in all felony cases, and if someone flees from an officer in a vehicle can be considered a “serious violent felon” under Indiana law, K-9 unit Deputy Chief Josh Barker explained. Police departments depend on K-9 dogs for searching dark, narrow spaces as well as for finding fleeing suspects, both necessary for police safety. Meanwhile, Federal civil rights laws don’t cover innocent bystanders bitten by police dogs.
A properly trained dog is supposed to release its bite on a person after a few seconds, creating puncture wounds and little else. In reality, victims have suffered extensive damage to scalps, faces, and testicles, USAToday reports.

Significantly, the investigation revealed that police dogs are frequently used in minor cases such as traffic violations, shoplifting, and mental health checks. All too often, the person suffering severe injuries from a police dog bite are not offenders at all, just innocent bystanders mistaken for offenders. “Police in Indiana are exempt from criminal liability and shielded from civil liability,” IndyStar explains.

Not really, we explain at Ramey & Hailey law. True, up until recently, you couldn’t sue a city or a government agency such as the police department.  The “sovereign immunity” doctrine protected governments from most lawsuits.  Times have changed, however, and today, when a government is at fault, you can sue them for damages.

Whether here in Indiana or around the globe, victims of brutality and their families can count on the attorneys at Ramey & Hailey to provide exceptional legal representation. Even in cases where the actual wrong was inflicted by individual police officers – or their dogs – , a city’s practices, customs, and policies, as well as its failure to train and supervise, can result in a deprivation of citizens’ rights.