IN THE NEWS: WRONGFUL DEATH LAWSUIT FILED AGAINST REHAB FACILITY 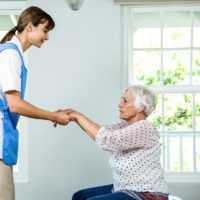 When Mrs. W. suffered and ultimately died as a result of abuse at a rehabilitation center, the harm wasn’t done by the staff members her family members had trusted to care for her needs. She was attacked by another patient.

Mrs. W. was receiving rehabilitation services after surgery had been performed at a local hospital. Asleep in her room, she was assaulted by another resident, a woman believed to have had diminished mental capabilities, causing Mrs. W. to suffer life-altering injuries, including a fractured tibia and fibula.  Because of the resulting pain and traumatic stress, Mrs. W. was confined on a permanent basis to a nursing home until she died.

Now, Mrs. W.’s personal representative has called upon the elder abuse attorneys at Ramey & Hailey Law to represent the estate in a personal injury wrongful death lawsuit against the northern Indiana healthcare facility where the attack took place.

Family members had trusted the facility to offer rehabilitative care of their elderly relative and help her return to living at home following her surgery. Instead, as a result of the facility’s staff failure to exercise reasonable care to protect Mrs. W.’s safety, the patient’s injury and death ensued.

No legal ruling has the power to restore Mrs. W. to life and health.  What “remedy” is possible will come in the form of financial recovery to the estate.  The complaint document requests damages to include medical, hospital, autopsy, funeral and burial expenses, plus attorney and legal fees and estate administration costs.

“There are many stories of resident altercations that end in personal injury or death,” Aging Home Health Care observes. “When it comes to dementia, Alzheimer’s, and other mind-altering diseases, the person is still responsible, but it is hard to press charges on someone who is not in their right mind….Many times justice can be found by going after the nursing facility.”