INDIANA IS NOT THAT KIND OF STATE 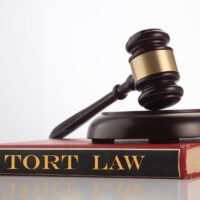 In order to understand how Indiana’s law is different from that in the majority of U.S. states, you need to first understand what a tort is:

A tort is an act or omission that causes injury or harm to another, explains the Cornell Law School Legal Information Institute.

Here at Ramey & Hailey, we often explain to our personal injury clients that tort law exists for three purposes:

The law allows injured parties to bring suit in civil court in order to obtain relief, and that is precisely the work in which we at Ramey & Hailey have been involved for more than forty years.

But, before we talk about Indiana law, there’s one more important distinction we want to help you understand: Torts are not the same as crimes.  Crimes are wrongs against the state or against society at large, and the main purpose of criminal law is to enforce criminal law and punish the wrongdoer. Torts, in contrast, are private wrongs against individual people. The central purpose is to compensate victims, as opposed to punishing the person or people who caused the damage.

What that means is that, after being hurt in an accident in which another driver was at fault, you have the right to sue. However, if it can be proven that you played any part in causing the accident, you’ll be able to sue for only a portion of the damages.  And, in Indiana, if you are found to be 50% or more at fault in causing the accident, you will not be able to collect from any other party.

To the extent that you played no part in causing the accident, you have three choices:

Choice #1: file a claim under your own insurance policy.

Choice #2: file a claim against the other driver’s insurance.

(In “no-fault” states, you would not be able to sue the other driver for pain and suffering, emotional distress, or inconvenience, but in Indiana, you can.)

Choice #3: file a claim against the other driver him or herself or that driver’s company (in the event the vehicle belonged to a taxicab or trucking company.

Many laws exist to protect victims of motor vehicle collisions, and the qualified and experienced attorneys at Ramey & Hailey help accident victims in many different states recover compensation for their losses. But in comparative fault tort law states such as Indiana, we have found, special knowledge and expertise is required.