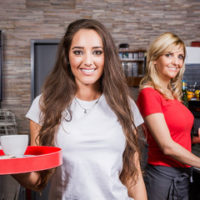 The true purpose of tort law, as one personal injury attorney described it to an Indiana Lawyer reporter, is to make things safer and better for people. Obviously there is the goal of compensating injured people for what they’re going through and for what they will be going through as a result of their injuries, but the real purpose is to force companies to keep things safer for the public.

At Ramey & Hailey Law, we agree. When crimes and violent acts happen away from home, the attorneys for injured parties can hold the owner or manager of the property liable under an area of the law called negligent security. That’s because possessors of property have a duty to offer reasonable security measures to protect lawful visitors from crimes by third parties, including assault, rape, and theft. To try and avoid having to compensate victims, property owners are encouraged to consider safety risks to their customers and employees.

O. M. parked her car in the parking lot of a barbecue restaurant in St. Louis, Missouri.

As she returned to her car after purchasing food in the restaurant, a male stranger

asked her for help in jump starting his car. The stranger then brandished a gun, forced

his way into her car and kidnapped her, subsequently physically and sexually

From a legal standpoint, O.M. was an “invitee”, which is the legal term for a person reasonably expected to enter a property, such as a customer or employee. Negligence law imposes a reasonable standard of care towards invitees.

In a more recent case against Denny’s Corporation, one customer had asked the other customers to be quiet, and they assaulted her.  Denny’s employees had not come to her defense. The court ruled in favor of the plaintiff, because “a restaurant owner must take appropriate measures to protect persons on the premises from foreseeable criminal acts of third parties.”  The woman’s request to others to quiet down was a foreseeable consequence of Denny’s failure to act.

“While a business has no general duty to control the conduct of outsiders, it cannot ignore danger”, writes Brad Reid in a Huffington Post article. A business cannot close its eyes to danger.  “Like it or not, outsider violence on your premises becomes your problem,” he warns business owners.

What do I have to prove to sue a restaurant owner for being assaulted by another patron? Is the question LegalMatch.com poses. The answer? Three things must be proven:

Assaulted in a store or restaurant? As your attorneys, we can bring suit to hold property owners liable.