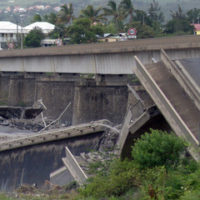 Navarro Brown, 37, was working on-site at the bridge for Structural Technologies VSL, a company that specializes in bridge cable tension and construction systems, CNN reports.  After the bridge in Miami-Dade, Florida collapsed, Brown was taken to a hospital and died there….

“My little girl was trapped in the car and couldn’t get out,” her father, Orlando Duran, told a reporter for the Nuevo Herald.

CNN reports that Florida International University had contracted with Structural Technologies company to build a bridge to keep pedestrians safe from traffic.  The contractor was Munilla Construction Management, along with partner company Figg Bridge Engineers. A new technology, called Accelerated Bridge Construction, had been used with an eye to streamlining the building process.

Even as I write this blog post about the tragedy that killed six people and injured several others, a National Transportation Safety Board investigation of the bridge collapse is ongoing. And, even as we grieve for the families of the victims, the first personal injury lawsuits have been filed against two companies involved in the project.

When an accident occurs because of faulty infrastructure, responsibility may be assigned to:

While the National Transportation Safety Board is charged with determining the probable cause of transportation and infrastructure failures which cause traffic accidents, “the NTSB does not assign fault or blame for an accident or incident…assignment of fault or legal liability is not relevant to the NTSB’s statutory mission…”

For that very reason, it is important for individual victims – or their survivors – of an infrastructure or building collapse accident to seek out a personal injury lawyer.

A personal injury lawyer is a lawyer who provides legal representation to those who claim to have been injured, physically or psychologically, as a result of the negligence or wrongdoing of another person, company, government agency, or other entity.

Enlisting the services of an attorney as soon as possible after the accident allows the attorney to send a “spoliation of evidence” letter out to every possible company involved in the accident, making sure evidence does not disappear.

If you have suffered a personal injury (or if you are the survivor of a family member who was the victim), the amount of financial help you stand to recover will depend not only on the actual medical costs you incurred, but also on:

In the case of the Florida bridge collapse, the wrongful death lawsuits are claiming negligence, saying the companies behind the project should have closed the roadway while the bridge was still being constructed.

Interestingly, one piece of initial evidence uncovered by the personal injury attorneys representing the victims showed that the project’s lead engineer had called the Florida Department of Transportation, telling state officials he had spotted cracks in the structure. (While it is not yet clear if cracks were the actual cause of the bridge’s failure, this is an example of the process of discovery that personal injury attorneys carry out in preparing a case for clients).

“Our deepest sympathies are with all those affected by this accident,” a FIGG representative stated on the company website. “Our entire team mourns the loss of life and injuries associated with this devastating tragedy, and our prayers go out to all involved.”

At Ramey & Hailey, we feel those words express our own sentiments precisely. At the same time, we are reminded of words used in a paper to teach aspiring attorneys at Indiana University School of Law:

“A lawsuit, like a chain, is only as strong as its weakest link…lawsuits are generally won or lost on the evidence…”

Infrastructure and building collapse injury lawsuits are particularly complex, with liability possibly shared among several different parties. Time and professional expertise are of the essence in helping injured victims and survivors of victims rebuild their financial lives.