MEDICAL MALPRACTICE IN THE U.S. – KNOW THE FACTS! 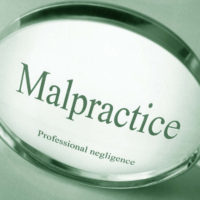 Let’s talk about medical malpractice in the U.S. Are there many instances of malpractice? Well, yes!

As far back as 1984, a Harvard study on medical errors estimated that 27,179 injuries, including 6895 deaths and 877 cases of permanent and total disability, resulted from negligent care in New York in 1984. More recently, after analyzing medical death rate data over an eight-year period, Johns Hopkins patient safety experts have calculated that more than 250,000 deaths per year in our country are due to medical error. Despite that startling statistic, the Center for Disease Control’s way of collecting national health statistics, the Johns Hopkins report points out, fails to classify medical errors separately on death certificates.

Johns Hopkins surgery professor Martin Makary explains that when the U.S. adopted the ICD (International Classification of Diseases) form back in 1949, “it was under-recognized that diagnostic errors, medical mistakes and the absence of safety nets could result in someone’s death”, and medical errors were unintentionally excluded from national health statistics, he adds.

Medical malpractice law is part of tort, or personal-injury law, The New England Journal of Medicine explained in its 2012 health policy report. To prevail in a tort lawsuit, the plaintiff must prove that:

What standard has traditionally been used to evaluate whether a breach rises to the level of negligence? Medical custom — the quality of care that would be expected of a reasonable practitioner in similar circumstances.

There are three social goals of malpractice litigation:

While medical misdiagnoses and surgical errors are fairly common, only a small percentage of people actually respond by pursuing legal action. This is partially due to victims not knowing their rights. They do not understand that they have the option to pursue a lawsuit.” It might be deduced, that the real problem is not that there is too much malpractice litigation but that there is too little,” the doctors.com comments ruefully.

What about medical malpractice in Indiana?

According to the National Practitioner Data Base, there were 1,255 reports of medical malpractice in Indiana during 2016 alone.  (Remember, medical error injuries that cause harm result in litigation only 2% of the time.)

Medical malpractice can occur as the result of:

An attorney can offer invaluable assistance to any victim of medical malpractice. But cases brought under the Indiana Medical Malpractice Act are subject to special rules regarding how the case proceeds and the extent of recovery available, and engaging an Indiana attorney experienced in malpractice is vital.

At Ramey & Hailey law firm, where we have been involved in Indiana medical malpractice cases in Indiana for three decades, we believe it’s important to know the facts!