MEDICAL MALPRACTICE LAWSUITS MUST PASS GO BEFORE GOING TO COURT 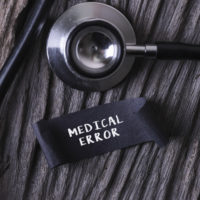 “Above all, do no harm.” That’s part of the Hippocratic Oath that medical students take. But, sometimes, harm is done, and when a hospital, doctor, dentist, or other health care professional causes injury to a patient, either through a negligent act or omission, that’s called medical malpractice.

The malpractice might be the result of a mistake in:

For one of – or a combination of – these reasons, you suffered permanent physical or psychological damage. You want to sue the medical provider and at least get monetary help dealing with your injuries and with the pain and suffering you’ve undergone.

Who will pay you?  Well, in the state of Indiana, physicians are responsible only for the first $400,000 in damages to any one patient. If you are awarded more than that, the excess – up to $1.6 million dollars – will come from the state’s Patient Compensation Fund (this increases to $1.8 million in 2019).

By way of background, Indiana was the first state to pass medical malpractice reform legislation. Because, unlike many other states, we have a Patient Compensation Fund, injured patients have hope of recovering large sums. (In many other states, because the healthcare provider may not have adequate insurance or assets, patients may be unable to get the financial help they deserve). INCAP  (Indiana Patient Compensation Act) has become a model of other states.

You must file your malpractice claim within two years of the time you believe the malpractice took place. (You may not have discovered that negligence until months or even years after the mistake happened; only an experienced malpractice lawyer would know how to determine the applicable period for the “statute of limitations” as it applies to your case.)

As you begin the process of suing a provider, a facility, or an HMO (that refused to pay for necessary tests or treatment), know that there’s a fight ahead. Even if there’s no doubt you were injured, the other side is going to try to prove you contributed to your own suffering by failing to provide accurate information or by not following the doctor’s orders. That’s why it’s essential to have an Indiana malpractice attorney at your side from the start.

OK. You’re well within the two year time frame, you have all your records lined up, and you think you’re finally ready to sue in court. But no, you’re not. In the State of Indiana, that’s not the way it works with medical malpractice injury cases. Patients must first file a proposed complaint with the Indiana Department of Insurance.

Your case will be evaluated by a medical review panel consisting of three physicians. (At least two of those must be specialists in the same field as the practitioner whom you’re accusing of malpractice.) Only after the panel has issued its report, can you proceed to a court trial (the report will be admissible as evidence).

It’s like the board game Monopoly:  Medical malpractice lawsuits must pass Go before “going” to court!