MIXED FEELINGS ON THE PART OF AN INDIANA PERSONAL INJURY ATTORNEY 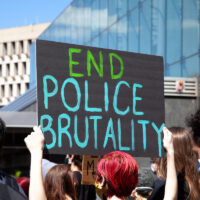 As a humble recent recipient of the Indiana Trial Lawyers Association prestigious Hoosier Freedom Award, I confess to having some mixed feelings about the rate of progress in Indianapolis when it comes to race relations. The goal of our work as personal injury attorneys, as the award states, is to create a more just society.

On the one hand, despite the fact that I myself have experienced racial prejudice over the course of my life, I view the future of race relations going forward in an optimistic light. People are becoming more aware of diversities in our community, we at Ramey & Hailey Law are finding, and are more willing to contribute to making our communities more just for everyone.

On the other hand, the realities in Indianapolis are still far from pretty. Our city has a violent crime problem, specifically with homicides and gun violence, as Tony Reeves writes in the Reflector. Reeves shares his concern that increased policing of specific high crime neighborhoods will result in people of color being arrested at disproportionately higher rates than whites, and that police are more likely to use force on blacks and Latinos. This is a topic of grave concern to me as well; just weeks ago, I made a presentation to the Marion County Bar Association about our mayor’s new law enforcement task force.

The “task” of a police force, simply put, is to protect citizens against brutality. When the opposite happens and citizens become the victims of brutality by police officers, it is important to know that there is legal recourse. That means that when governmental employees, including police officers, inflict wrong, the municipal government who employed those officers can be sued in civil court. It’s not that the municipal government itself was directly the cause of the injury, but that a city’s practices, customs, and policies, as well as its failure to train and supervise, can result in a deprivation of citizens’ rights.

At Ramey & Hailey, one major goal of ours is to reach out to the people behind the statistics in the headlines, innocent folks whose lives have been thrown off track because they or someone they love has been victim of unfair treatment by police. We are lawyers, after all, devoted to the law, and when lawlessness grows in our city we are outraged. In the meanwhile, we know we need to reach out to dependent family members of those killed and maimed by unjustified violence by police. And the reality is, the only financial recourse available to both the victims of brutality and their dependents – is through our civil court system.