PREGNANCY DISCRIMINATION NEEDS TO SPEND A TRIMESTER IN COURT 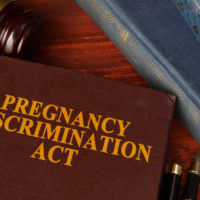 In 1978, Congress passed the Pregnancy Discrimination Act, but, forty years later, a CNN article reports: …..“Despite legal protections, pregnancy discrimination claims are still widespread.” Ten years ago amendments were made to the Americans with Disabilities Act, requiring employers to provide necessary accommodations to pregnant women whose pregnancy-related conditions qualify as disabilities. Exactly when do pregnancy-related conditions become disabilities? When the impairment “substantially limits a major life activity”.

Is the problem getting fixed?  On the surface, it might appear so; last year alone, $15 million in settlements were paid out for pregnancy discrimination charges filed with the EEOC. The problem, CNN reports, is that a “far larger number of women were denied requests for simple accommodations such as more frequent breaks, time off for prenatal visits or less physically demanding duties.”

Just last month, CNN published the article “Fired for being pregnant: Another kind of discrimination women face at work”, telling the story of a 30-year old single mother who told her supervisor at the Walmart Distribution Center in Atlanta that she wasn’t feeling well. In order for her to be given a break, the supervisor informed Whitney Tomlinson, she would need to see a note from Whitney’s doctor. When Tomlinson provided the note, she was told she needed to apply for an unpaid leave from her job.  She had become a “liability”, she was told, because of her “restrictions”, and would not be allowed to return to work until after she had given birth. A discrimination charge against Walmart has been filed with the Equal Opportunity commission.

Under PDA (the Federal Pregnancy Discrimination Act), an employer must make modifications (or accommodations) for pregnant workers when the employer does so for other employees who are similarly limited in their ability to perform job functions. These might include:

In contrast, under the Americans with Disabilities Act, pregnancy alone is not a disability.  However, pregnancy-related conditions that “substantially limit a major life activity”, do require that the employer provide accommodations.  Those conditions include:

Do these things sound familiar? Have you or has someone you know suffered discrimination based on pregnancy?  At Ramey & Hailey, our employment law attorneys work to protect women from discrimination. Your job is important, and safeguarding your employment rights is vital to your own success and well-being as well as to your unborn child’s health and safety.

There’s been a lot of media attention lately on employer sexual harassment. But unfair treatment of pregnant employees is harassment, too, and pregnancy-related lawsuits have involved workers in all sectors of the workforce, including childcare, healthcare, education, social services, hospitality, legal, retail, staffing, manufacturing, wholesale supply, energy, real estate, and food/beverage services, the EEOC explains.

When pregnant UPS driver Peggy Young was placed on unpaid leave, she lost her health insurance.  She couldn’t collect unemployment because she hadn’t been fired. Peggy’s case went all the way to the U.S. Supreme Court before the employer finally gave her a settlement.  “I was willing to work,” Young said.  “I was willing to do my regular job, and they wouldn’t let me, period….We shouldn’t be made to choose between our job and having a child.”

Is this a fight worth starting? Under both state and federal law, victims of discrimination may receive financial recovery of any or all of these types of payment:

A host of federal and state laws exist to protect our civil rights. Do you know an employer who deserves to spend a “trimester” in court over pregnancy discrimination? Do you know someone whose employment rights need safeguarding?