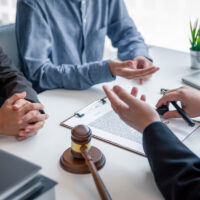 Can a congregation sue its own pastor? Yes, when that pastor, along with a number of his selected deacons, is trying to impose their authority on the congregation at large, impeding the will of the congregants, in fact seizing control of the building and monetary assets owned by the congregation.

In this hardly-to-be-believed tale, members of the Greater Northwest Baptist Church have enlisted the help of the personal injury attorneys at Ramey & Hailey Law to bring an action in the Marion County Court against Pastor Cory Rogers.

By way of background, after the original senior pastor retired in 2015, a search committee interviewed and subsequently hired Pastor Cory Rogers. Over the next two years, an assortment of conflicts with Rogers caused many members to leave the congregation, and, on repeated occasions in 2018, the leaders requested to meet with him to discuss whether his employment would be terminated. On each occasion, Rogers and his deacons canceled meetings or ended them whenever Rogers’ contract renewal was to be discussed. The annual meeting in January of 2019 was prematurely terminated because Pastor Rogers would not allow the question to be called. In essence, Pastor Cory Rogers and his deacons were attempting to impose their own authority upon the congregation, in direct conflict with the organization structure and governing documents of Greater Northwest Baptist Church.

The “standoff” has caused a very real concern on the part of the congregation about the church’s assets, including the church building and land, valued at $3,000,000, and cash accounts valued at approximately $150,000. These assets are the lawful possessions of the congregation, and there is concern that Pastor Rogers and his deacons, in their attempt to seize control, might attempt to encumber, appropriate, or dispose of those assets.
In turning to the court, the congregation is asking for a declaratory judgment (as set forth in the Indiana Code), stipulating that:

When lawsuits arise as the result of actions on the part of a religious organization’s employee, including clergy members, the Pew Research Center explains, “courts usually resolve such cases by applying the same legal principles that they would use to address similar claims against secular organizations”.

At Ramey & Hailey, many people come to us having suffered a traumatic ordeal, and for this reason, we are dedicated to treating each client as an individual, offering not just legal representation, but compassionate, personalized counsel. In the case of the Greater Northwest Baptist Church, there is an entire congregation needing compassionate and immediate help so that they can get back to their mission of serving the needs of their worshippers and their community.