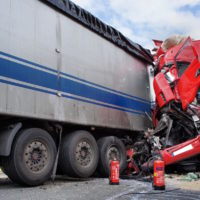 There are usually five reasons trucking accidents happen, I had explained last December in this Ramey & Hailey blog: 1. driver error 2.poor vehicle maintenance 3. equipment failure  4.weather 5.improper cargo loading. But, in the seven-vehicle, chain-reaction crash that happened near Terre Haute, Indiana a little over a month ago, it’s hard to sort out exactly what happened.

Typically, three different types of legal claims can follow from traffic accidents such as these:

“Usually, car accidents involving serious or long-term injuries require an attorney to get the most desirable outcome,” legal resource alllaw.com explains. At Ramey & Hailey, having represented injured people and their survivors for more than forty years, we know about accidents involving trucks and passenger vehicles.

Think about it: A typical passenger car weighs around 4,000 pounds; a typical 18-wheeler truck might weigh twenty times that. That’s precisely why 98% of all semi accidents result in at least one fatality, with 60.5 injuries caused by big rigs for every 100 million miles driven on U.S. roadways, according to truckaccidents.org.

There’s something else to think about, the Lawsuit Information Center points out:  “The insurance policies for a commercial semi truck are typically very large and can lead to million dollar payouts to any injured victims, and for this reason, commercial trucking insurance companies will do everything in their power to find fault in anyone but their policy holder.”

Representing people injured in trucking accidents – or the survivors of those killed in accidents – is a mission at the Ramey & Hailey personal injury law firm in Indiana.