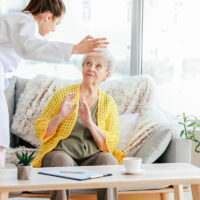 When, fifteen years ago, then-Governor Mitch Daniels issued an Executive Order requiring our Indiana State Department of Health to implement a medical error reporting system, hospitals and surgery centers were the main focus of the initiative designed to reduce the frequency of medical errors.

After more than 40 years of dealing with medical malpractice cases, at Ramey & Hailey Law we believe that nursing home abuse is a problem of similar magnitude. In fact, according to a WTTV report, the Department of Health and Human Services estimated that one in every five visits from a nursing home is the result of abuse! Worse, the same report found that nursing homes frequently failed to report abuse incidents.

As we move into the new year, it’s sobering to realize that, as recently as the middle of last year, a report released by two Pennsylvania senators listed three Indiana nursing homes as among the worst in the country, with an additional fourteen having serious quality and care issues. Those facilities have been put on a special monitoring program called the Special Focus Facility Program, or SFF, and have been given 18-24 months to make recommended improvements.

It was true fifteen years ago and it is true today: Just as medical errors generally result from failure of the systems used in providing healthcare, elder abuse in nursing homes results from the failure of systems of oversight. There are only two paths towards improvement. The first is reporting through the monitoring programs. The second path is through civil court litigation. That means that individuals who have been hurt through nursing home abuse must speak up, allowing legal professionals to bring matters of wrongdoing and neglect into the civil courts.

When medical professionals fail to adhere to the appropriate standard of care, that is actually a type of medical negligence. After all, family members trust caregivers in the nursing home to alleviate their loved ones’ suffering, doing everything they can to preserve their relatives’ quality of life. And when that level of dedicated effort is not being put forth, the situation can actually be categorized as medical malpractice. Family members can sue to recover damages if negligence or abuse is discovered.

As medical malpractice attorneys, we not only help victims of nursing home abuse – and victims’ family members – get the financial compensation they need, our actions represent progress towards reducing the recurrence of abuse and neglect in our nursing homes.