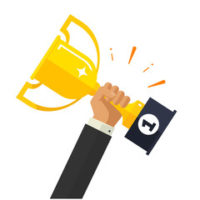 All of us at Ramey & Hailey have a reason to be proud.  At the recent Membership & Awards Luncheon of the American Association for Justice, held in Denver, Colorado, our own Rich Hailey was honored with the Lifetime Achievement Award.

The stated mission of the American Association for Justice:

courtrooms, even when taking on the most powerful of interests.

Under “what we do”, the AAJ lists three important areas:

The Lifetime Achievement Award, as explained in the event program, has special significance, because it:

Recognizes an AAJ member of at least 20 years’ standing whose

Courtroom advocacy has, during a distinguished career, significantly

advanced the rights of the wrongfully injured, and who by substantial

service to AAJ and the trial bar, has significantly furthered the cause

for justice and the mission of the Association.

As former president of the American Association for Justice, Richard Hailey has been invited to give presentations on legal issues to law schools and professional organizations throughout the United States, and has appeared on 60 Minutes and National Public Radio. He has been actively involved with trial lawyer associations in South Africa and Australia.

“In my line of work, which includes helping victims…., I’ve learned that life can be brutal, but the process of seeking legal remedy need not be,” Mr.Hailey wrote in our Ramey & Hailey blog. “I’m hoping that….we’ll be able to reach out to anyone who needs a shoulder to lean on and an ear to listen, plus the experience and legal knowhow to help stop…abuse in its tracks!”

Yes, all of us at Ramey & Hailey have reason to be proud. But the most important thing about this award, we realize, is the message of hope it brings for people who have suffered damage to their property or their health.

At Ramey & Hailey, our personal injury attorneys stand ready to protect and defend you!