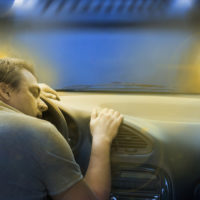 “Road-weary truckers risk lives on the job”, reads a headline in a recent issue of the Indianapolis Star. While decades of study have led researchers to conclude that “sleep-deprived drivers become exponentially more hazardous the longer they spend on the road,” compliance with truck driver safety laws has relied almost exclusively on carrier and driver honesty.

Although the USA TODAY network investigation featured in the article has been focused on roads around busy seaports, as personal injury attorneys in Indiana, we can tell you that, the number and severity of injuries caused by trucking accidents is posing major problems everywhere in the country, including our state.

Where, exactly, did large truck crash deaths occur in 2016? 60% happened on major roads, 32% on interstates and freeways, and 7% on minor roads. When, exactly? Almost half happened between three in the afternoon and midnight. 31% of passenger vehicle occupants killed in two-vehicle crashes with a large truck in 2016 were in head-on crashes with the truck. Twenty percent involved the front of the passenger vehicle striking the rear of the large truck.”

But not all victims of truck/passenger car accidents die. Other traumatic effects resulting from the typical car vs. semi accident include amputations, paralysis, and brain damage, to name a few.

The National Safety Council estimates the cost of motor-vehicle deaths, injuries, and property damage in 2016 was $432 billion, a 12% increase from the previous year. Those costs include losses in wages and productivity, medical expenses, property damage, employer costs and administrative expenses, the NSC says. And, according to a study by the Insurance Information Institute, the economic cost of motor vehicle crashes amount to almost 2% of the U.S. Gross Domestic Product, close to $900 a year for every person living in the United States!

Road-weary truckers risk life and health on the job, for sure, but not only their own. When we Indiana personal injury attorneys are engaged to represent drivers and passengers in a vehicle involved in a collision with a truck – or the relatives and survivors of those drivers and passengers, we’re working to obtain compensation for:

In operating motor vehicles, every person owes a duty to others to operate these vehicles with ordinary and reasonable care. Sleep-deprived semi truck drivers are unable to exercise reasonable care, and the results of that negligence are devastating. Meanwhile, however, the trucker might be employed by a large multistate commercial or even international conglomerate represented by a large legal team experienced in protecting against liability.

In fact, it is common for trucking companies to have investigative teams on the site of a serious accident within 24 hours. For that reason you, too, must be prepared to act quickly, consulting legal counsel immediately if you are injured in a trucking or common carrier accident.

When it comes to truck accident victims, at Ramey & Hailey Law, we’re prepared to offer a whole different level of help!