SERIOUSLY INJURED IN OR AROUND A STORE? SEEK COMPENSATION SOON 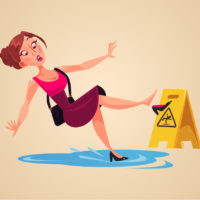 For quite a number of unlucky Indiana citizens, their holiday shopping sprees  – or their trips to return or exchange gifts after the holiday – had a very unfortunate side effect: they were injured, through no fault of their own, on the premises of a store.

Until such an accident happens, most people never think of falling as a leading cause of bodily injury and even death, but it certainly is. According to the Centers for Disease Control and Prevention, here in the U.S.:

If you were injured seriously in or around a store, and you believe you can prove that the store managers could have prevented the injury from happening, you deserve to get help. You’re rightfully concerned that the medical costs are going to be much more than you can afford. Are you going to be missing work because of the accident?

The holidays are barely past, yet here at Ramey & Hailey, we’ve already begun to hear the sad stories about slip-and-fall accidents in stores.  Usually the accident happens because of the condition of the store’s floor:

Several of the accidents, clients shared with us, happened outside (you’ll recall the cold spell we suffered in Indiana at the very start of the New Year). Store owners failed to take responsibility for the upkeep of surrounding pathways and parking lots. The incidents were generally caused by:

Slip and fall accident cases are based on a type of negligence called premises liability. The principle at work is that property owners have a duty to act reasonably to prevent or warn of dangerous conditions on their premises.

What should you do if you’re ever injured in or around a store? (If you’re the family member or friend who witnessed the accident, these are things you can do to help….)

There’s a lot WE need to do on our end as your personal injury lawyers. We communicate with the property owner’s insurance company and with yours. We research and find evidence of the store owner’s liability. We help organize all your medical records, communicating – and negotiating on your behalf – with all the healthcare providers who are involved in examining, evaluating, testing, and treating your injuries.

We hope you were not one of those unlucky Indiana citizens whose holiday shopping spree or trip to exchange a gift turned into a nightmare. But, if you were injured due to someone else’s failure to keep a property in a safe condition, you should turn to the legal system for help.