SERVING ALCOHOLIC DRINKS? HOSTS NEED TO GIVE A DRAM! 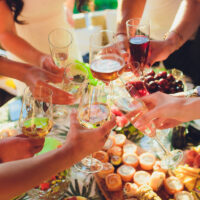 If you served alcohol while entertaining at home, and one of your guests caused an accident on his way home, you could be held responsible. Indiana is one of several states that allow injury claims to be brought against social hosts when there is an alcohol-related accident that causes injury.

Dram shop laws were originally meant to regulate bartenders and restaurant owners who served alcohol to a person who was obviously intoxicated. Whether the person providing (selling, serving, or giving) the alcohol to a person who then causes injury to another can be found liable depends on whether the intoxication was the “proximate” (foreseeable) cause of the injury.

Interestingly, the liability doesn’t need to be the result of a car accident. Suppose the Smiths host a cocktail reception at their home.  One of the guests begins slurring his speech and walking unsteadily, eventually bumping into another guest who then falls off the balcony and is injured. The injured person can make a claim against the host for his injuries, as well as against the inebriated person who was directly responsible for the damage.

As personal injury attorneys in Indiana with more than forty years of helping injured people recover the economic and non-economic damages to which they are entitled, we know that many times, both automobile crashes and in-home accidents can be traced to alcohol use.

Our task then becomes to help injured victims recover for:

“Social host liability remains a controversial tool for reducing the incidence of drunk driving,” observe the authors of a report in the Cornell Law Review. “The concept of social host liability raises many questions concerning the average person’s ability to monitor and control a guest’s consumption of alcohol.”

Are people willing to sue their own friends or neighbors? Many are not.  But what if a friend or neighbor had served alcohol to your teen son or daughter, who then drove drunk, causing injury or death to themselves or others? You’ve been careful not to be a “negligent parent”, and never leave liquor readily accessible to your children. But when the negligence of friends or neighbors now threatens to forever alter your child’s life and that of everyone in your family, would you not feel the host should bear the cost?

Whether you were the host, the parent of an inebriated teen, or the injured party, should you call on a personal injury attorney for assistance? Remember, the insurance companies (your own insurance and that of the injured party) have now become your adversaries. You need help analyzing the situation and making a decision about your next step.

When alcoholic drinks are involved, everybody needs to give a dram!