THE MOST TRAGIC OF ALL PERSONAL INJURIES: CHILDREN KILLED ON THE ROAD 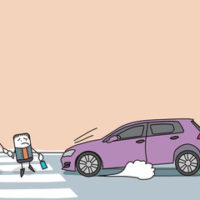 In Marietta, Mississippi, a truck hit an elementary school student trying to board a school bus.

In Tampa, Florida, five children and two adults were struck by a vehicle while waiting at a school bus stop.

In Franklin Township, Pennsylvania, a 7-year-old boy waiting at a school bus stop was struck and killed by a hit-and-run driver.

In Rochester, Indiana, twin boys and their 9-year-old sister were killed while trying to board a school bus.

More than 1,600 children under the age of 15 die each year in road crashes, the Association for Safe International Road Travel tells us, with the Centers for Disease Control and Prevention adding that 1 of every 4 unintentional injury deaths of children younger than 13 are caused by crashes.

From 2007 to 2016, there were 281 school-age children killed in school-transportation-related crashes, the National Highway Transportation Safety Administration tells us. Of those:

(A school-transportation-related crash is a crash that involves, either directly or indirectly, a school bus body vehicle, or a non-school bus functioning as a school bus, transporting children to or from school or school-related activities, the NHTSA explains. In the four Indiana accidents last week, the children hurt or killed were not actually on a school bus, but were either waiting for a bus or in the process of boarding.)

Whenever a driver hits a pedestrian, often the biggest question is: Whose fault was the accident? Generally, fault is determined by the law of negligence. A person who fails to exercise a reasonable standard of care under the circumstances may be considered “negligent.”

On behalf of a pedestrian child killed by a vehicle, a claim can be filed against the driver’s or vehicle owner’s auto liability insurance policy.

The big question in each of the four Indiana accident cases where children were killed is – was the driver of the vehicle negligent? A person can be negligent by doing something that he or she should not have done (for example, running a red light or speeding), or by failing to do something that he or she should have done (failing to yield, stop for a pedestrian, or turn on lights when driving at night, or failing to stop behind a school bus).

At Ramey & Hailey law firm, we work extensively on accidents resulting in catastrophic or permanent loss involving people hurt or killed through driver or equipment error. When insurance isn’t enough to compensate for the losses suffered, our firm is there to see our clients get the recovery they deserve through the legal system.

Needless to say, nothing can ever compensate parents for the loss of a child!