THINK YOU DON’T NEED A DOCTOR AFTER BEING HIT BY A CAR? THINK AGAIN! 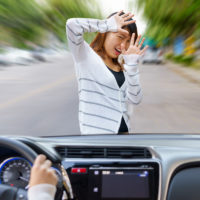 As a pedestrian, you’ve just been in a car accident.  You’re shaken up, but feel lucky to have escaped serious injury, and your first instinct is to minimize the situation. But, even if you believe you’re OK, get yourself to a doctor as soon as possible, dmv.org cautions. There are two very important reasons for that recommendation:

In addition to the mental trauma and emotional disorientation that follows any auto accident experience, Dr. Alex Bigham, D.C. points out, “sometimes vehicle accidents cause physical damage that’s hard to notice amidst immediate distractions.” Even serious physical issues might not present any signs for several days, he cautions. Some delayed injury symptoms that might result from a car crash include:

If you have medical insurance, that is probably the first place you would turn to pay for those medical bills. It will then be up to the medical insurance company to collect reimbursement from the driver’s auto insurance. If you were working at the time of the accident, a worker’s compensation insurance carrier may be involved as well.

When you are treated by a medical professional, there is an exact price tag associated with each visit and each treatment. After you’ve been injured by a vehicle, though, where things get trickier is estimating the cost of the future medical and rehabilitation care you might need for years to come.  As personal injury attorneys in Indiana, for example, we at Ramey & Hailey Law will look at several factors, including:

After being hit by a vehicle, you may feel ready to get right back to life the way it was before the incident. You have no desire to spend time talking with doctors, insurance agents, and lawyers. But the truth is, rushing to “put things back together” could prove to be a costly mistake.  Consider your own long term physical and financial wellbeing.  Think again.