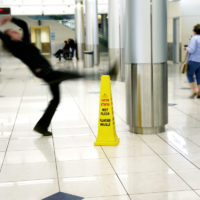 Until it happens to us or to someone we love, we don’t think about slipping as a cause of serious body injury. But, as the Centers for Disease Control and Prevention tell us, more than 800,000 patients are hospitalized each year because of fall injuries. From a legal point of view, as we know at Ramey & Hailey, slip and fall accident cases are based on the principle of premises liability – property owners have a duty to prevent dangerous conditions in and around their premises.

In November of 2011, Lush Dacaj slipped on a loose tread on the concrete stairs leading down to the subway, falling to the bottom of the stairs and sustaining serious neck injuries.  Even following two cervical fusion surgeries and two years of physical therapy, the injured man was unable to work. In his personal injury lawsuit against the New York City Transit Authority, the jury awarded him:

Like Lush Dacaj, many thousands of people are injured each year – some very seriously, when they slip or trip and fall.  Not always, however, can the property owner be held responsible for the accident. Judges and juries determine whether a property owner took reasonable steps to keep things safe.  In fact, in the Dacaj v. New York City Transit case, the jury apportions liability 86% to the defendant (NYC Transit) and 14% to the plaintiff (Dacaj). “A property owner cannot prevent every fall on his or her premises,” justia.com explains. “All visitors to the property are required to use reasonable care, such as watching where they are going, to avoid getting hurt.”

As personal injury attorneys, we are called upon to help clients deal with health care and living expenses after they have sustained a serious, life-altering injury. But that in itself is far from a simple matter. A civil lawsuit requires gathering medical records, witness statements, and physical evidence, plus doing investigative research. Lush Dacaj, remember, was injured in 2011, and only last month, in 2019, was there a final ruling on his case!

With forty years’ experience representing people who have suffered a traumatic ordeal, at Ramey & Hailey, we know that after a slip and fall accident, experienced and compassionate support will be needed!