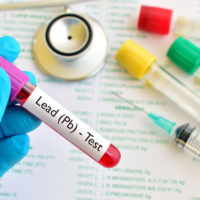 According to a recent CBS news report, children age 6 and under whose blood was tested for lead using the Magellan LeadCare Testing Systems may not have received accurate results; pregnant and nursing moms who received the test may also need to be retested, the U.S. Food and Drug Administration says.

Lead is a heavy metal commonly contained in consumer products. The substance can be dangerous to the brains of babies and children, leading to:

Blood lead tests are mandated for all children in 11 U.S. states, while others mandate the tests only for children in areas of exposure risk. Reuters learned that only 41% of Medicaid-enrolled 1-2 year olds had in fact been tested. The Center for Disease Control estimates that some 500,000 children under age six have blood lead levels approaching the “public health action” level of 5 micrograms per deciliter or higher.

Current Indiana law does not require universal testing of all Hoosier children; the only children who are required, by Federal law, to be tested for lead poisoning are those who receive Medicaid benefits (see Indiana State Department of Health – IN.gov). On the other hand (at Ramey & Hailey Law, we closely follow lead poisoning issues in our state) we are encouraged by the fact that Indiana plans to spend $3 million annually to combat lead poisoning. Funding for the project comes from the federal Children’s Health Insurance Program, and will cover the costs of:

As personal injury attorneys in Indiana, we want to help spread the word about lead poisoning. Lead-based paint was banned by the federal government back in 1978, yet millions of people, including children, suffer the effects of accidental poisoning every year.

Just weeks ago, we wrote about three locations in Indiana where contamination of soil and water have become of major concern:

The Indiana State Department of Health itself explains why the issue of lead poisoning is such a challenging one: “Lead poisoning is a silent menace which often does not manifest itself until the damage is done.”

At Ramey & Hailey Law, we want to protect and defend against that silent – but not invisible – menace. “When children ingest lead, the chemical gets in their bloodstreams,” caution USA Today reporters Carrie Blackmore Smith and Hannah Parling. “Then it travels to the brain and can cause stunted growth, slurred or delayed speech, violent behavior and even death in rare cases.”

If you suspect the health of a child or group of children has suffered damage after being exposed to toxic substances in the environment, at Ramey & Hailey Law, we’re here to protect and defend.